What Is Tripe? Is Tripe Healthy For Dogs? Tripe For Dogs 101

In the famous – not to mention classic! – Simpsons episode ‘Lisa the Vegetarian’, the meat council screens some kid-friendly propaganda film for the children at school. After it is done, Lisa exclaims: “they can’t seriously expect us to swallow that tripe?!”, whereupon Principal Skinner asks the children to help themselves to a bowl of tripe that is on the teacher’s desk, courtesy of the meat council. The children run towards it while Lisa is sitting, dumbfounded, in her chair.

That moment when Lisa is in her chair always makes me laugh, not to mention the short propaganda film which precedes it. Well, you can argue over the validity of this meaty substance for humans, but what about dogs? Wait wait, hang on. First of all – what is tripe?

What is Tripe? Where Does It Come From? 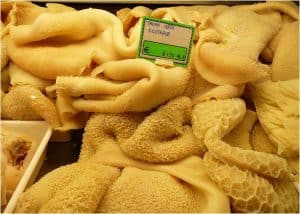 The recipe book History of Tripe describes it as “the edible lining from the stomachs of various farm animals”. Most of these stomachs are obtained from cattle, and there are different ways of cooking and preparing it. Many nations and cultures have their own variation of the dish.

The beef variant is traditionally made of the first three chambers of a cow’s stomach. The fourth chamber is known as reed tripe, and it is a separate kind of food. Other animals, such as sheep and pigs, are also used in different ways, and theirs has its own name, too. Basically, any animal with a stomach could potentially become a tripe dish.

Alright, so it’s something which humans have been eating for many years, but what about dogs? After all, aren’t they the truer carnivores between us? Well, actually that is debatable. What is not up for debate is that the stomach lining has some serious benefits for canines.

Benefits of Tripe For Dogs

First of all, let me say this: the best and most optimal type is green tripe. Named so, not because of its actual color or the color which you turn when first handling it, but rather due to its nutritional value. Green tripe is the most natural kind around. Other types may be lacking some of the major beneficial nutrients – the good bacteria, healthy fats, protein content, fatty acids, and digestive enzymes, all of which are part of what makes it such a healthy treat for your doggy.

Tripe has it all, people. And you have to remember that before being domesticated, dogs were all about this kind of eating. Any genuine carnivore will agree that your prey’s stomach is one of the ‘must-have’ courses when dining out (if you know what I mean). So, while it may sound nasty, it is actually one of the best things for an actual carnivore to eat. Overall, it’s perfect for dogs with sensitive stomachs and teeth, for those who are picky eaters, and for pregnant or nursing bitches.

You gotta take the good with the bad, and eating stomach lining does have a few drawbacks. However, they are all downsides which have to do with us humans, and not our fuzzy companions. First off, it may be difficult to obtain high-quality green tripe. If you find a butcher who does his own killing on the spot and is willing to part with it immediately, make that connection stick.

Second, the scent. Let’s put it this way: a slaughtered animal’s stomach smells. Smells bad. Make no mistake about that. You will get used to it if you keep it up, but there is no denying that the smell is not a good one, nor should it be. I mean, it is an animal’s stomach. Don’t expect it to smell like lavender essential oil.

Third, preparation. It is not easy to prepare tripe for consumption, even when it’s meant to be eaten by a dog. Some say it is best to partially freeze it first, which should make it easier to cut and shape it. Either way, it is yet another factor which needs to be dealt with. Oh, and you’ll need a really good cutting/carving knife, or else it will dull quickly.

Fourth, sanitary concerns. Wash your hands thoroughly after handling it. It has many bacteria’s in it, good and bad, which are beneficial for dogs, but not necessarily for us. Make sure to clean yourself properly after being around it, since you do not want to get hit with any kind of illness or medical condition, and certainly not ones which could be prevented by proper handling and a good hand washing.

Are there any doggy downsides to tripe? Not really, so long as you give the dog amounts in proportion to its weight and size. 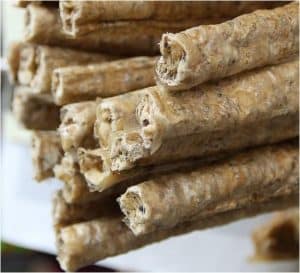 Tripe can be served in a variety of ways, and some really dress it up. But really, you can just serve it straight up in a dish or bowl. Dogs don’t really find the need for an appetizer, a glass of wine, and a scoop of sherbert before the main course for the purposes of cleansing the palate. They are more of a ‘gimme gimme gimme’ kind of animal, which is part of why we love them so.

As for cooking tripe for dogs, it is a no-no. Dogs need to eat the stuff raw because many times the intense heat and process of cooking will eliminate the positive digestive enzymes which inhabit the stomach lining, effectively rendering it much less useful. There are dogs who suffer from enzyme deficiency as a regular condition, so when you want to give them a boost, make sure you do it right.

For a more complete and nutritious meal, serve it with veggies and plain white/brown rice. No spices, no additives, no extra ingredients. You could also just pour it onto your doggy’s regular, crunchy food. As I said, there are all kinds of ways.

Tripe is considered to be a meat meal, and it can be served to a doggy as often as the owner would like. Again, watch the quantities. If you feed morning and evening, portion it out appropriately. I don’t feel I really need to tell anyone this, but watch your dog’s behavior, monitor the way it is conducting itself, and be on the lookout for any signs of something being wrong. As always, if you feel something is up, or if your dog is acting weird, get to a vet. New foods can be a challenge for some dogs, but tripe – especially the green type- is something so organic and so natural for them to consume, it is most likely that nothing will shake their resolve to eat-eat-eat the stuff up, and keep wanting more.

Learn About Kennel Cough In Dogs

Tripe is a trip. Once you get into the habit of handling the weird food, it becomes easier. As humans, we are blessed and cursed with the ability to adapt to just about anything. So, if you seriously care about your dog, and you want the best for him or her – AND are willing and able to make it happen – serving your dog raw tripe is one of the best things sources of nutrients and energy for a dog.