In many ways, Goji Berries are like any other edible berry. They are sweet, fruity, and are chockful of beta-carotene, which is known for its positive effects on skin and complexion. These berries have been called a ‘superfood’ (like almonds, or avocados – as we have covered in the past!) but I personally don’t believe in labeling things in that fashion.

It is an amazing berry, which can provide you with many health benefits, but to me it is no more super than many other types of fruits and vegetables. Studies are still being conducted on the health benefits of Goji berries but that is also irrelevant, as far as I am concerned. I don’t need a study to tell me that an edible berry is probably linked to many positive effects. It is a fruit, and it just grows like that. If you should happen to eat it, you’ll benefit from it. That’s its job – to provide nourishment and sustainability.

Where Are Goji Berries Found? 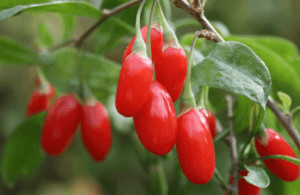 Gojis (also named wolfberries) are native to several European and Asian regions where they can be found all year round. They are a tiny fruit, and are usually no larger than a small grape. The fruit has been around for thousands of years, and since it is native to areas of Asia it is of widespread use in Chinese medicine. They are used to treat conditions having to do with the eyes, liver, and kidneys. As I said, the West is still doing its research, so results are fairly inconclusive.

How To Eat Goji Berries

People eat them as a standalone snack, but these sweet-tart red berries can take many forms (fresh, dried, chopped, powdered, pureed, or juiced), and may be found in different kinds of food, like health bars, teas, yogurts. They are even sometimes added to meat and poultry dishes. I don’t eat meat or poultry, but I used to. I can totally see how these berries could go with a nice chicken dinner, for instance. As long as you wash them first, you can do pretty much anything you want to them.

In all honesty, the Goji gets a bad rap. When the berry found its renaissance in the United States in the early 2000s, many companies made false claims about the berry’s benefits. They communicated scientifically unsupported information to consumers, and perhaps tried to pass it off as proven fact when it wasn’t. As a result of that, several lawsuits were filed, some of which are still pending today. 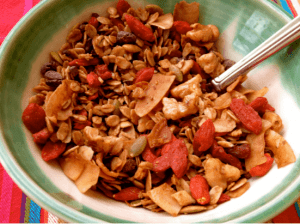 This is exactly why I am not calling it a superfood, or a superfruit. It isn’t super, it’s Goji! Does it have health benefits? Of course. Gojis are full of vitamin C, vitamin A, vitamin B2, as well as antioxidants. They can give your immune system a healthy push, and they have even been linked to keeping the eyes healthy. The seeds inside of the berry, which add to its interesting texture while you are munching on them, are a great source of fiber.

These berries have no fat in them, and their calorie count is low. Results on this next tidbit are also inconclusive, but there are people with arthritis who claim that their situation has been improved by the Gojis. This is probably closely related to the high levels of antioxidants which the berry boasts. Antioxidants may help with cases of inflammation and joint pains, so this fits the bill. Although, as I said, clinical studies are ongoing.

There was actually a small study which found that regular consumption of Goji juice can help keep your energy levels elevated and your gastric system in sync. Furthermore, the sugar within the berry enters the blood slowly, so you aren’t in danger of getting a sudden sugar rush and experiencing the subsequent crash. It is a mellow fruit. 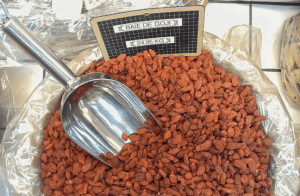 So, yes, the Goji berry has its share of benefits, but there are some restrictions on it as well. If you suffer from high blood pressure or diabetes, consult with your physician before incorporating Gojis into your regular diet. There is also the possibility that if you are on certain medication, Gojis may not be recommended. Everything needs to be taken in moderation, and that statement is even truer when a previous medical condition exists.

Those who advocate the consumption of Gojis as a superfood, claim it can help with almost anything, from acting as an anti-aging ingredient to being a multiple cancer-stopper. Goji has been said to improve libido and concentration, protect against cardiovascular diseases, regulate the fat content in the body, and even help with conditions of the mind, such as nutritionally-related depression and stress.

If you have never had Gojis as part of your diet, it is recommended to start slowly, and not consume too much in one sitting. The effects on the body’s gastrointestinal system can be overwhelming if consumed in large doses at the beginning. Take things lightly and gradually. That way, you will be able to reap the full benefits of this wonderful little fruit.

Did you know #GojiBerries can help improve your immune system, eyes and skin, and may even #treat cancer tumors? You can add some for $1! pic.twitter.com/Q2PdkQ7sXB

Another reason which may encourage you to take it easy on these berries is the price. Gojis are a somewhat expensive berry. They can be found in many shops and health food stores, and can usually be bought in bulk or in a box. The cheapest way to get your hands on a bunch of Goji berries, however, is either online or at a local Asian store/market, where they normally have dried Goji berries sitting in a sack, along with a scooper.

Thanks for reading our Goji Berries feature – be sure to check back for more on healthy foods here at Maple Holistics!

Is the Goji berry recommended? The answer to that is a resounding yes unless you have some sort of pre-existing condition. It can be eaten in so many ways, and it can do the body a lot of good. Price may be an issue for some people, but it shouldn’t stop you from indulging in this fruit on occasion, especially when you consider all that you will be getting in return. The Chinese have known it for thousands of years, and now it is your turn to get a piece of that action. So go on, and get your sweet, red, chewy, Goji berry on.