Some of you in the homeopathic circles may have had some experience with carnauba wax. Many see it as a safe and healthy alternative to a wide variety of chemical-based waxes. You can use it for a variety of products and applications.

However, many of us are largely unaware of just how many different uses this wax has. According to a 2019 study, carnauba wax is popular due to the fact that “carnauba wax is the hardest wax and has the highest melting point of any commercial natural wax, has low solubility and is predominantly comprised of aliphatic esters and diesters of cinnamic acid”. It is a natural product that is generally safer than petroleum-based waxes. Yet the truth is that companies often blend it with synthetic chemicals. This is in order to strengthen its use as an industrial agent.

This applies to certain foods, sweets, and various industrial products (such as sealants, polishes, adhesives and molding agents). It’s even an addition to certain natural oils such as coconut oil as a means of increasing the volume per product.

However, in recent times, I’ve come across articles or spoken to people who seemed to be against the idea of using carnauba wax or products that contain carnauba wax. The series of reasons always seems to include possible negative health effects. It also involves the various ecological knock-on effects that harvesting the wax may have on the environment.

So because I was under the impression that it was a healthier alternative, I decided to investigate the matter a little further. I wanted to understand whether it’s something worth avoiding or not. I also wanted to know whether there are natural or synthetic chemicals that would be a suitable alternative in terms of health issues/benefits or ecological dependencies.

The internet seems to be somewhat dry on this subject. So I hope that this article can shed a little light on the subject and give you a better idea of whether to stay with carnauba wax (and its related products) or make the switch to a simpler, less harmful alternative.

What Is Yellow Carnauba Wax? 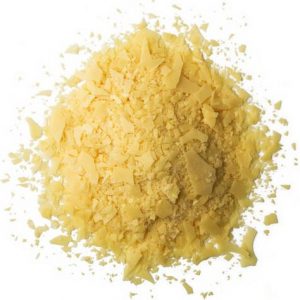 Carnauba wax is native to Brazil. It comes from a palm known as the Copernica prunifera. This palm only occurs in the northeastern states of Brazil. The wax occurs on the leaves of the palm during dry, hot weather. It’s a natural means of protecting the leaves from the elements.

In order to harvest the wax, workers beat the leaves as a means of removing the wax. It fall off as flakes, and workers then collect it for processing and storage.

However, in recent years, a greater awareness about the ecological effects of harvesting the wax has lead to workers only removing up to 10 -20 leaves from a given tree at any time. This is due to the fact that by removing more than 10-20 leaves, you stunt the tree’s growth. This can ultimately cause it to die off slowly.

This in turn, has a very negative effect for the surrounding ecosystem that may be dependent on these trees. So it’s important that governments enforce these regulations.

During the processing stage, workers grind the flakes into a finer powder or keep them in their natural state. In some cases, they dissolve the flakes in aliphatic solvents. These are petroleum-based chemicals such as paraffin, iso-paraffin or cyclic paraffins.

This is part of a process that can ultimately create a stronger form of the wax that is free of any unnecessary chemical constituents that may form a part of the natural composition of the wax. Thus, it is more suitable for industrial use.

However, this seems to be one of the issues that most homoeopaths point out as being problematic for the long-term health benefits of using carnauba wax over time. But I’ll get into that in the following section of the article. So keep reading!

So in doing my research on the general uses of this wax, I realized that it’s not always the wax itself that is the problem. Rather, it can be how you use it.

In the previous section I pointed out that certain variations of the wax are processed with various aliphatic solvent mixtures which ultimately help to make the final product more suitable for industrial uses.

However, it is during this process that the addition or inclusion of the solvents becomes a health issue blip. This is where the problems start.

Carnauba wax in its natural form is generally safe for human ingestion (whether orally or through the surface of the skin). This is due to the fact that our system does not absorb it. It simply tends to pass through our bodies without affecting our biological processes. The Panel on Food Additives and Nutrient Sources found that “the use of carnauba wax as a food additive with the currently authorised uses would not be of safety concern”.

Because it includes natural alcohols, fatty acids, acids and hydrocarbons, it is a potent hypoallergenic and natural emollient. However, some have (rather ironically) reported having allergic reactions to the wax even in its natural state. This seems to be the leading cause of the health issues that are associated with the wax.

On top of that, another common problem with the wax is based on its inclusion in mascara and eyeliners. According to research, it is a common ingredient in certain cosmetics because “it raises the melting point of gels.” When the wax comes into contact with the eyes, it causes the oil glands to become clogged. This can lead to irritation, and in some cases, dry eye disease.

Dry eye disease can vary in its symptoms ranging from itchy or scratchy eyes to something more serious like a burning sensation or blurry vision.

The issue is due to a lack of tears or moisture on the surface layer of the eyeball. It can become a chronic issue, which is not something anyone wants to have to deal with for an extended period of time.

What Kinds of Products Use Yellow Carnauba Wax?

Carnauba wax helps make up a wide variety of products – in fact, a lot more than I had ever realized before doing my research.

For a long time, I was under the impression that it was generally sold as a product on its own or simply included in cosmetics products and certain food products – but the wax has far more uses than that.

In terms of cosmetics products, you’re most likely to find carnauba wax in eye-related makeup products such as eyeliners and mascaras as it’s generally used to increase the hold that these products offer, allowing them to stick longer and as a bonding agent allowing liquid and chemical ingredients to hold together. It’s basically a natural binding agent through and through.

In terms of food products, the wax is used in a variety of different products from chewing gums to gelatin sweets, chocolates, paper coatings, fruit coatings and even M&M’s to name but a few.

While it may not be toxic, people suffering from allergies may want to double-check the ingredients lists of any candy before buying them just to be on the safe side. Besides this, you can find carnauba wax in products across a wide variety of industries.

Okay, so there’s a lot of contention online surrounding the health benefits or hazards of consuming carnauba wax in food products. I help to debunk a bit of this and make it easy for you to make up your own mind here.

Firstly, carnauba wax is technically a plant-based product (and therefore vegan-friendly). Yet a lot of vegans refrain from eating it or using products that contain it. This is due to the effects that this may have on the forests of northeastern Brazil.

It’s a common misconception that monkeys help harvest carnauba wax. This is a serious issue, and one that animal right’s activists and vegans are very concerned about (and rightfully so). Yet it’s generally related to the harvesting of coconuts and palm olives, not carnauba wax.

Regulations are in place to ensure that the trees do not sustain damage during the harvesting phase. Though some argue that it’s better to avoid the issue altogether.

So really, it’s up to you as a vegan to decide whether you’re comfortable or not using products that contain carnauba wax. If you do, I’d recommend using a brand that follows the harvesting guidelines carefully. This will ensure reduced damage or harm to the environment.

With regards to its use in various food products, the wax is generally safe for use. Unless, of course, you happen to suffer from an allergy. Ironically, the wax also acts as a natural hypoallergenic for other forms of allergic reactions. It is rich in fatty acids (good for brain function and the skin).

However, if you’re allergic to the wax, then you should avoid food products that contain the wax altogether. This is most likely the best way to avoid any health issues.

In general, we can attribute the worse cases of illness or health ailments resulting from the ingestion of carnauba wax to an allergy or sensitivity.

So if you start feeling ill or show any signs of an adverse reaction after consuming a certain food product, you may suffer from an allergy. Consult a GP for advice on how to treat these issues. Or prevent the problem from occurring in the future by avoiding relevant products.

Carnauba oil is useful in a large amount of different products, not only food or industrial products. If you’re against the idea of using products that contain carnauba oil, then you’re going to have to cut a lot out of your usual spending.

I would recommend sticking with carnauba oil, though. It’s typically safe for general use and is also vegan-friendly when you harvest it correctly. I would say that it’s a perfectly good, natural alternative on its own. And it’s one that you can trust more often than not.

Ultimately, a lot of the aversion to carnauba wax seems to be based in the wrong places. It’s vegan-friendly, so long as it’s harvested within the regulated amount. And because of increasing pressure from ecological organizations, unethical harvesting is bound to be controlled and prevented.

Carnauba wax is relatively healthy and it’s highly versatile. It’s a fantastic natural alternative to chemicals which are often in products ranging from industrial to food products.

I think it’s safe to say that there are fewer dangers to using carnauba wax (other than cosmetics products). This is as opposed to many of the chemical binding agents such as sulfates or parabens that are common today. I hope that’s helped clear up some of the confusion about this natural product and its possible effects or uses.